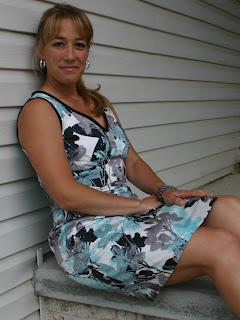 It only took me 3 1/2 months, but it's finished!  Back in March I saw this lovely "bebe" dress iin InStyle magazine and set out to make my own version. Here's that Previous Blog Post.  Fast forward through all the things that got in the way: Prom alterations, end of the school year, and life in general... and here we are to the finish line!

Inspiration Garment: Bebe Spring 2013 "Luxury Vines Printed Peplum Dress" No longer available, I have no idea what the original price was, but it is a cotton dress and just looked so fresh and springy. 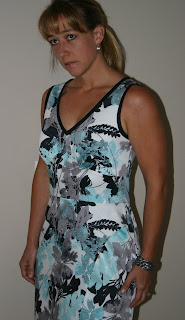 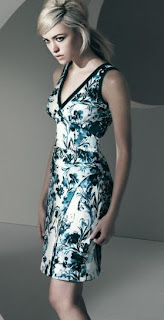 When I saw it described as having a peplum, looked really closely... Yeah, not very obvious, even when you see the one from the bebe shopping website: 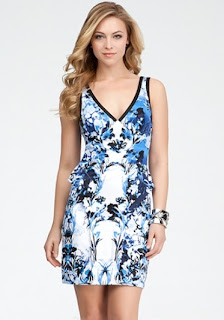 So, I thought the skirt was asymmetrical, with a single hip curve, but I was wrong. No biggie. Still love my dress. I do like the way the bebe version has centered that "white space" between the flowers at the center front, though... 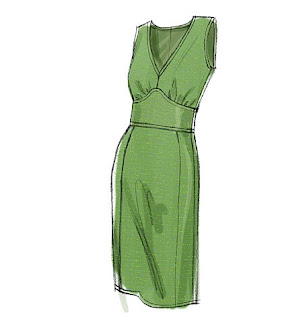 Pattern Sizing: I made a mix of 12 and 14 based on the finished garment measurements. True to size for the most part, I could take it in a little in the waist/hips, but it feels good!

Did it look like the photo/drawing on the pattern envelope once you were done sewing with it? Well, it definitely ended up looking like the "inspiration garment"!

Were the instructions easy to follow? Yes, but I didn't follow them much since I lined the whole dress and it changed up the order of assembly a little. Basically, I constructed the outer garment top, then the skirt portion, keeping them separate

What did you particularly like or dislike about the pattern? The style lines were exactly what I needed to recreate the dress.

Fabric Used: Cotton Sateen from Haberman Fabrics. Since sold out, but it was the closest colorway/floral to the bebe dress that I could find. I also fully lined with white poly "posh" lining. I think the cotton was about $10/yd, so with the invisible zipper, bias tape and lining... I'd estimate it cost me about $30. 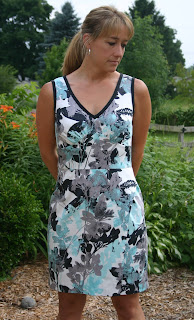 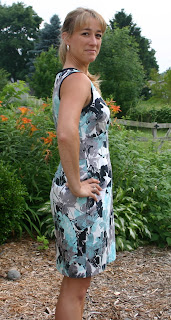 Pattern alterations or any design changes you made: Just a few changes...
1. Fully lined the garment.
2. Added Double Fold Bias Tape to the neck and armholes.
3. The pictures I was studying made the dress appear to have an asymmetrical hip curve on the skirt. (I later realized that the "peplum" was created by the two slightly pronounced hip curves, but my dress was already midway through construction.) I traced the Butterick skirt pattern using a regular darted view for the front right, and the hip curve version for the front left, and placed a "half" front underneath the hip curve side. Clear as mud, right?! 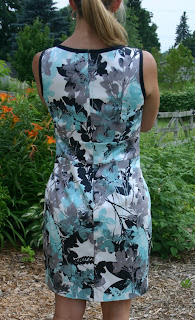 Would you sew it again? Would you recommend it to others?  Yes, I'd make it again! In fact, I overbought on fabric, and have enough for another version! It was quite simple and I'm very happy with the outcome. 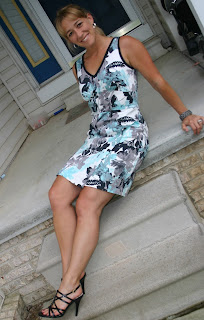 Conclusion: It took me a lot longer to complete than I planned (I've been quite busy since late March with Prom alterations, finishing the school year, and other sewing and embroidery jobs), but I love it.

I love making RTW knock-offs. I have my next one ready to go, in fact. It's a Valentino dress, and I'm really excited to get moving on that project! This time I won't let it sit for 3 months, though!
Posted by Unknown at 8:46 PM

What a wonderful summer dress! Love your "copycat pose".

You are the knockoff queen! In fact, I like yours much better. The Bebe model's print looks like it has an angry face on the lower front. Great dress, Kristine!

Another great copy of RTW!
You look great, too!

You definitely captured the essence of the dress! It's beautiful on you. Can't wait to see the next one!

Awesome knockoff off of your inspiration dress. You look so fit and fabulous, Kristine!

Don't get me wrong Kristina I love your dress and it is beatifully made, but I don't see the point of making an exact copy of a designer garment. Isn't the point of sewing to create garments that are original and perfect for us. I know this comment is likely to generate controversy. I'm not trying to be nasty - but it is an issue I feel strongly about.

Love the dress and it looks great on you, you tanned fit mom!

As to Gail's comment, sewing is not all about making your own original. Even Coco Chanel made that comment about everything really just is a copy of something that has gone before or words to that effect and I agree. I love making originals but I love knocking off too. It is very satisfying to see a thousand dollar jacket that I could never afford and instead make an exact duplicate that I can wear and is flattering. It is down right fun and why would you not want someone to have fun? Just think of the incredible wardrobe you have and others like Caroline, myself, and many more who are inspired by couture designers we can't afford.

I respect Gail's opinion and she is entitled to it. I'd like to add that copying a designer original is more than likely a challenging bit of sewing and in that sense it stretches our skills and adds new ones to the our toolbox. So keep making your knockoffs, ladies. I love to look at them and you all look great in them. If sewing required that all garments be original, who would be sewing? Not too many.

There are so many different reasons why I sew. Too many to list in this small space, but a great theme for my next blog post. In this specific instance, I admired a dress in a magazine that (at the time) couldn't be located. My reason for the next knock-off is it's too expensive. The "point of sewing" is different for each person and for me, for each garment that I make.

That looks fabulous on you!!! Brava on such a good job of "copying" (actually I'd call it "improving upon") the original dress.

Everything I sew is inspired by something, a pattern, a dress in a magazine or maybe a garment that another person made. When I sew I sew what makes me happy and if I see a designer's dress I will do exactly what you did Christine, make the dress to fit my body. With all due respect to Gail's comment "original" Bahhhhhhhhhhh!
Kudos to you Gail for starting such an interesting conversation.

Great dress!! Another answer for Gail is FIT! "Original" garments usually aren't a custom fit to the purchaser/wearer.

Fantastic knockoff!
Making knockoffs is one of the reasons I sew. Though I've yet to make an exact duplicate, I've been able to duplicate the pattern of some of my favorite RTW. Can't wait to see you Valentino :)

This is an awesome dress! Lovely fabric and the black trim is perfect. Great fit too. Enjoy wearing it!

love that choice of fabric, dress looks fantastic on you

Wonderful dress...as usual! Love the fabric and the style. Glad you finished it in time to enjoy this summer.

You're really styling in that dress girl! Lovely!

great dress and it really looks fantastic on you! You are a golden girl of summer!

You / the dress looks fantastic and fits you perfectly. Sometimes one just has to do a knock off and other times you feel more creative and do something original. No matter what you choose, somehow, we are inspired by something or someone else. I had the pleasure of being in the company of two Sewing Goddesses this weekend and I will tell you that I am dying to copy what the made / wore. Keep up the great work!

Fabulous! The fit is perfect and is so flattering on you! Such a fantastic job :)

fantastic job!as far as making a copy, isn't that what the challenge's snoop shopping is all about? lol!anyways you did a fantastic job & it looks great on you!
Helen

Great dress from an inspiration design! if we didn't all "copy" style, Vogue magazine and the rest would all be out of business. I love your version. I suits you perfectly!

Fantastic dress! The fabric is perfect and, of course, I love your side-by-side photo!

Great dress. And much longer than the original. That is another reason to sew our own. All those cute dresses are so short! 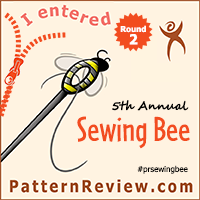 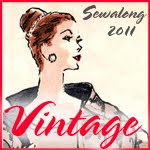 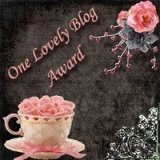 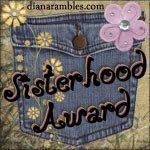 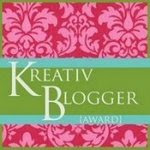